Studying animal models to enhance the overall understanding of cancer is a longstanding and valuable practice that, until recently, had been fairly uniform. The traditional model, the laboratory mouse, has occupied the oncologic arena since the 1980s, offering researchers a way to observe tumor growth and drug response in a natural environment, as opposed to in a petri dish. This approach, known as comparative medicine, more realistically represents how cancer behaves in humans and yields insight as to how scientists can effectively treat the disease. 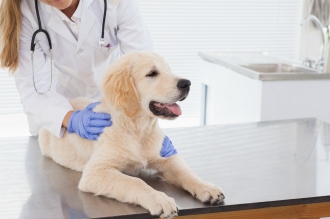 It wasn’t until late 2005 that a bigger, potentially better animal model entered the comparative medicine scene. Publication of the canine genome enabled comparison of dogs and humans at a molecular and genetic level, revealing biological similarities in each. In October 2017, the National Institutes of Health (NIH) recognized the untapped potential of the canine model in cancer research with a five-year $2.5 million grant awarded to Weill Cornell Medicine and Tufts University scientists to study new therapeutic strategies in dogs with lymphoma.

Dogs experience naturally occurring lymphoma that resembles the way that the disease manifests in humans. It is estimated that up to 80,000 dogs are diagnosed with lymphoma per year in the United States alone, with increased incidence in golden retrievers, whose lifetime risk for lymphoma is 1:8, as compared to a 1:50 risk in humans.

“I want to cure cancer in people, and dogs provide a great opportunity for research that can help us move lymphoma therapies to the clinic for humans faster,” says the Lymphoma Program’s Kristy Richards, PhD, MD, who will lead the research as a co-principal investigator.

“We’re using the NIH grant to study immunotherapies and targeted treatment regimens in combinations that haven’t yet been tried in humans. The idea is to get to a therapy that can cure diffuse large B-cell lymphoma (DLBCL) in dogs. If it works well in dogs, we have better rationale to move the therapy forward in people.”

The immune system is the body’s in-house security guard that protects against infection and disease, but some forms of disease, like cancer, have evolved to evade the immune system’s defense mechanisms. Immunotherapies, which harness the power of a patient’s own immune system to fight cancer, rely upon an intact immune system, which lab mice grown in sterile cages and never challenged by sickness do not possess. Dogs, thanks to their propensity to eat, lick and roll around in whatever unsanitary substance they please, have thoroughly educated immune systems, a prime environment for testing immunotherapies.

But that is far from the only advantage of the canine model. “We can do things with the dog model that we can’t do with the mouse model, or even with the human model,” says Dr. Richards.

About two-thirds of human DLBCL patients enter remission following six cycles of standard chemotherapy regimen rituximab, cyclophosphamide, doxorubicin, vincristine and prednisone (R-CHOP). Dogs on lower, more frequent doses of the same treatment regimen almost always enter remission – but they also almost always relapse. If they were to receive the human dose intensity, they would suffer significant impairments to quality of life, such as decreases in physical activity and appetite, and vomiting and diarrhea.

Since standard chemotherapy cures nearly 70 percent of humans with DLBCL, current clinical trials of less toxic, non-chemotherapy based regimens are limited to the one-third of people who eventually relapse. Novel treatments used in these trials must be proven effective as single agents before being combined in what would ultimately require extensive (and therefore expensive) study.

The fact that dogs are not cured by standard therapies makes them the perfect candidates for testing of new, targeted therapies with fewer toxic side effects, permitting use of doses similar to those used in humans. Through use of these novel agents, dogs help science to leapfrog ahead of years’ worth of human trialing, while science helps dogs to live longer, happier lives.

Treating people’s pet dogs also encourages a humanistic approach. Much like in human oncology, scientists work to develop therapies that take more into consideration than just killing cancer cells, like quality of life, for example.

In fact, one of Dr. Richard’s favorite aspects about her research is that she gets to help the dogs that she’s studying.

“If we can manage to do something good for human medicine at the same time that we’re helping the model organism that’s helping us to study it, that’s a great thing,” she says.

Dr. Richards says that enlisting the help of the canine model to study lymphoma is a concept that is “arriving, but has not yet arrived.” Support from the NIH, as well as from organizations like Puppy Up and Paws 4 a Cure that raise funds to conduct clinical trials for dogs, plays a major role in validating the benefits of the canine lymphoma model, but further research is required to actually reap those benefits.