Patients often question whether various lymphoma types run in families, concerned that their own diagnosis may indicate cancer risk for their loved ones, as well. When an inquiry regarding the possibility of genetic predisposition in cutaneous T-cell lymphoma (CTCL) recently came through our clinic, we sat down with expert Jia Ruan, MD, PhD, to break down what we know and what we don’t know about the cause of this rare and complex condition. 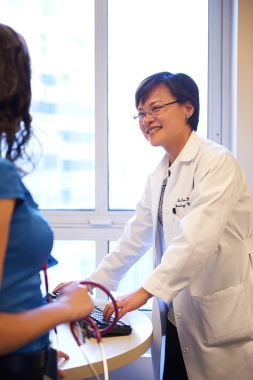 The most common subtype of CTCL, mycosis fungoides (MF), occurs when malignant cells develop from CD4+CD45RO+ T-lymphocytes and migrate to the skin. Symptoms include scaly and itchy rash-like patches that may thicken over time and develop into a plaque or a tumor. If the cancer then makes its way from the skin to the lymphatic and blood system, MF becomes the more aggressive Sézary syndrome (SS). MF patients with limited skin symptoms do very well with skin-directed treatment, such as light therapy and topical medicines including steroids, while those with more extensive skin involvement or SS often require systemic treatment.

Although mycosis fungoides and Sézary syndrome are the most common types of cutaneous T-cell lymphoma, they are still quite rare, occurring in only 4-5 percent of non-Hodgkin lymphoma cases, with about 3,000 new diagnoses per year. The median age at diagnosis is 50-70, with a prevalence in men and African Americans.

It is in part due to their rarity that doctors and researchers have yet to understand what causes MF/SS. While there is no definitive evidence of familial risk of CTCL, scientists are continually evaluating whether genetics play a role in the disease formation.

Human leukocyte antigen (HLA) genes, which enable the immune system to discern between proteins native and foreign to the body, possess specific variations, or alleles, that are inherited via the family germline and passed through generations. When a certain HLA class II allele (specifically DQB1*04) was measured in a study of six families, each with occurrences of mycosis fungoides in two first-degree relatives, researchers found the allele to appear more frequently in patients than in the healthy control population, thus suggesting an association of the allele with familial MF. It is worth noting, however, that although some familial clusters of MF have been reported, the vast majority of CTCL cases occur without a familial link.

Additionally, deep genetic sequencing (whole exome) of mycosis fungoides samples, in which the patients’ DNA was analyzed to identify genetic variants, revealed recurrent mutations that seem to be acquired during a lifetime, rather than inherited – also known as somatic mutations. Somatic mutations are believed to be a leading factor in the unchecked cell division in most cancers. The examples of alterations included genes involved in: T-cell activation and programmed cell death (apoptosis), NF-κB signaling that plays a role in cell proliferation and survival, remodeling of chromatin (the DNA and proteins from which chromosomes are derived), and DNA damage response.

Without any strong scientific evidence of hereditary susceptibility, CTCL will likely continue to be thought of as an acquired disorder. Those with skin rash who are concerned about risk and family history are encouraged to see a dermatologist, who can refer to an oncologist or other specialist if the CTCL diagnosis is confirmed.