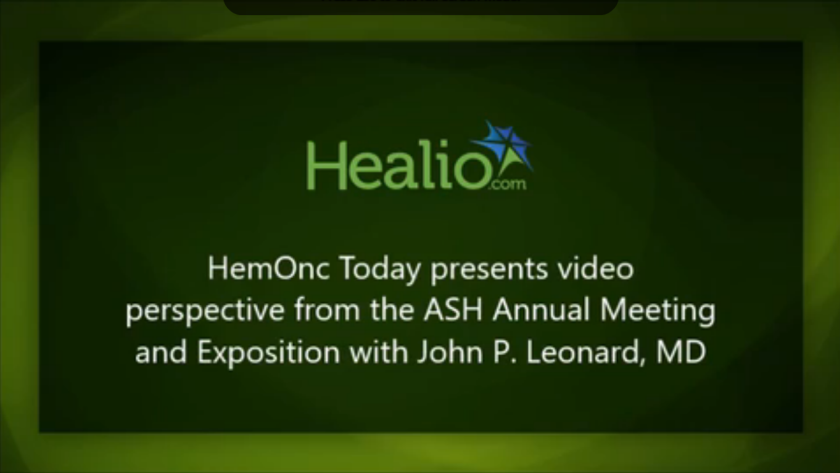 Click on the graphic above to watch this interview from the 2016 annual meeting of the American Society of Hematology, Lymphoma Program Director, Dr. John Leonard discusses results from the recently completed GALLIUM trial. In this trial researchers compared the safety and efficacy of either rituximab or obinutuzumab with chemotherapy followed by maintenance with the same agent as first-line therapy for patients with previously untreated follicular lymphoma.

In February 2016 the FDA approved the use of obinutuzumab in combination with bendamustine followed by obinutuzumab monotherapy for the treatment of patients with follicular lymphoma (FL) who relapsed after, or are refractory to rituximab.

This is the second FDA approval for obintuzumab. In 2013 obintuzumab was approved for use in previously untreated chronic lymphocytic leukemia (CLL) in combination with chlorambucil.

Why was obinutuzumab granted FDA approval?

Obinutuzumab received this FDA approval based on the results from the multi-center, open label, Phase III GADOLIN trial. The primary endpoint of the study was progression free survival. Of the 413 patients enrolled in the study the most common form of indolent non-Hodgkin lymphoma was follicular lymphoma, accounting for 321 patients. Researchers found that the obinutuzumab/bendamustine combination followed by obinutuzumab monotherapy reduced disease progression by 52% when compared to the use of bendamustine alone.

Were there any side effects?

Obinutuzumab is approved by the FDA, and therefore available throughout the United States for specific conditions. Additionally, obinutuzumab is being studied in ongoing phase 3 studies for first-line diffuse large B-cell lymphoma and first-line indolent non-Hodgkin lymphoma. At Weill Cornell a Phase 1 trial for the combination of obintuzumab combined with GDC-0199 for patients with previously untreated chronic lymphocytic leukemia is open to enrollment. Additional studies are planned in the future.

A full list of trials open at WCM for patients with lymphoma is available on our Joint Clinical Trials website.

What else should I know about the GADOLIN trial and obinutuzumab?

Obinutuzumab represents the next generation of anti-CD20 antibodies to be developed after rituximab was approved for the treatment of indolent lymphoma in 1997. In many ways, rituximab and obinutuzumab are very similar, but there are some key differences. The big question is whether those differences make obinutuzumab a better therapy. The German CLL Study Group CLL11 trial demonstrated clearly that the combination of chlorambucil plus obinutuzumab resulted in more durable responses than the combination of chlorambucil plus rituximab when given to people with previously untreated CLL. However, in a group of patients with previously treated follicular lymphoma, there did not appear to be a significant clinical benefit for obintuzumab over follicular lymphoma when administered as single agents.

The GADOLIN trial was designed to compare the combination of obinutuzumab plus bendamustine to bendamustine alone in a group of patients that were considered refractory to rituximab. In other words, could obinutuzumab overcome resistance to rituximab? The trial, however, has a several features that must be carefully considered when interpreting the results.

Second, the definition of rituximab refractory does not necessarily mean that patients did not respond to rituximab, they may have merely had short responses or reduction in tumor size that did not meet the research criteria to qualify as a response. Similarly, there is considerable data to suggest that anti-CD20 antibodies can sensitize lymphoma cells to killing by cytotoxic chemotherapy. In other words, it is possible, perhaps even likely, that the addition of rituximab to bendamustine would have beaten bendamustine in a group of patients deemed to be rituximab refractory.

Third, the dose and schedule of obinutuzumab favored that arm. Obinutuzumab was administered at a flat dose of 1000 mg in combination with bendamustine. The average dose of rituximab is probably only about two-thirds of that dose in most patients, suggesting that one possible reason for the superiority of obinutuzumab over rituximab may simply be dosing. Moreover, the randomized group that received obintuzumab continued  to receive obinutuzumab every 2 months for up to 2 years after 6 cycles of bendamustine plus obinutuzumab, while patients in the bendamustine arm received no further therapy. This strategy of continuous therapy clearly favored the obinutuzumab arm. Importantly, there was no reported difference in long-term survival between the arms.

Based on the GADOLIN trial, it is reasonable to suggest that a patient who is refractory to rituximab based on the definition above may derive a longer response from the addition of obinutuzumab to bendamustine followed by two years of ongoing obinutuzumab maintenance. However, it is not clear whether the same patient might not benefit equally from the combination of bendamustine plus rituximab followed by rituximab maintenance. Similarly, these data should not be used to support the combination of bendamustine plus obinutuzumab in patients who are not refractory to rituximab. Other studies will need to address that issue.